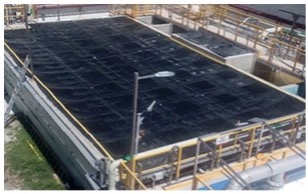 Here is an excerpt from the article.

“Early on…odor control wasn’t a priority – until new neighbors began to complain. While new plants can handle odor control preemptively in the facility design, existing plants with an odor control problem have to figure out a way to handle it, but they also have to find a place in their budget,” according to Bock.

To combat these pernicious odors, Bock recommends Anue Water Technologies’ Geomembrane Covers. These covers utilize carbon-infused filters to provide effective commercial odor control solutions by reducing odor emissions and eliminating H2S. They feature a breathable design that is suitable for most climates and can be customized to fit openings of virtually any size. And with a lifespan of 9 to 18 months depending on emission levels, they do not require much maintenance.

“People have framed them and put them on an outside vent of a building to prevent the internal odors from exiting the building. They can be secured easily with a wire tire or a pipe clamp around pipes exiting buildings such that the air that is exiting has to pass through the carbon. People have mounted the carbon impregnated filter to the underside of grated walks. They’ll lift up the grate, secure the membrane to the bottom of the grate, and they’ll put the grate back down above the tank or anything of that nature,” says Bock.

While Anue Water Technologies’ Geomembrane Covers provide efficient commercial odor control solutions, they also enhance sustainability initiatives and safety measures while reducing costs. At Coca-Cola’s Coco-FEMSA franchise, they originally implemented Anue’s Geomembrane Covers to combat odor issues. But over the next three years, the plant cut down on its greenhouse gas emissions while lowering its chemical and energy usage – which decreased operational costs.

This inspired another Coca-Cola FEMSA franchise to install the Geomembrane Covers over two reactors that were emitting harsh odors despite using odor control chemicals and having rigid covers placed over them. The breathable design of the Geomembrane Covers’ carbon-infused filters enabled water, ammonia (NH3), and hydrogen sulfide (H2S) to flow while eliminating tough odors, which stopped the complaints from the surrounding community. And since the filters are porous, the plant was spared from dangerous pressure build-up that can lead to adverse safety issues.

In the end, the implementation of Geomembrane Covers improved the Coca-Cola FEMSA franchise’s margins because the cost and installation of the covers were much lower than the expense of using odor-reducing chemicals. They also reduced maintenance needs and energy consumption, resulting in additional financial savings.

Contact us today to learn more about our wastewater treatment products and services.