May The FORSe Be With You!

Wastewater treatment service company, Anue Water Technologies (AWT), has completed the testing of the Anue FORSe2 oxygenation system at a lift station in Alberta, Canada. This describes the conditions found within the test environment and the results of the treatment.

The demonstration had two objectives:

AWT’s FORSe2 system is designed for the control of corrosion and odor within municipal wastewater treatment systems by oxidizing sulfur containing organic compounds so that they exist in a form that is no longer malodorous, corrosive, or otherwise detrimental to system and environmental health. These sulfur containing compounds, particularly hydrogen sulfide (H2S), are typically associated with the anaerobic bacteria ‘slime layer’ found in the parts of the system that have low to zero oxygen present at any given time, such as the inner walls of piping.

O2 infusion into municipal sewer water will increase dissolved oxygen (DO) levels. Increased DO levels will convert the slime layer into an aerobic layer and eliminate its sulfur production. By impeding and reversing the creation of H2S through oxidation with oxygen (O2), The FORSe2 technology is able to significantly decrease these negative effects. 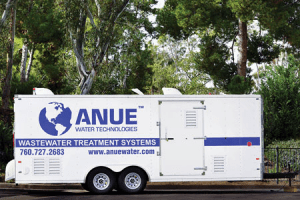 Anue Water Technologies’ Mobile Demonstration Unit #1 was used for this trial. It houses the FORSe system inside a large RV that can travel around the US & Canada for testing. The unit consists of the following major components:

The equipment was operated as follows, on the following schedule:

Treatment of the force main occurred from 09/14/2016 to 09/22/2016 at varying rates of oxygen output that are detailed below in Table 1. Variation to output was made to observe the collection system’s response to various wastewater treatment levels. The system was stopped from September 17 AM to September 19 AM to observe whether H2S levels would remain low without treatment.

In addition to grab samples, an OdaLog was placed in the manhole for the entirety of the demonstration.

There was dissolved oxygen detected even in the samples prior to wastewater treatment. This is a common occurrence at locations with a “waterfall” effect at the force main discharge sampling point, as there is at the LS force main discharge manhole. However, after the treatment of wastewater, there is a very high residual DO maintained through the end of pipe. This occurs even with the reduced treatment level of 40 L/min.

Dissolved sulfide is no longer detected with the system operating.

The data below were collected at the force main discharge manhole before and during the demonstration period.

The average H2S level at the man hole downstream before oxygen treatment was 59 ppm and reached maximum at 483 ppm around 12:47 PM. During the first two days of treatment (70 LPM), the H2S level dropped to average of 2.4 ppm, with peak level at 23 ppm. The wastewater treatment was stopped after Saturday, September 17th at 8:00 AM, the H2S average increased slowly during the stoppage period, to 8.1 ppm on Saturday and 34 ppm on Sunday (average values).

On Monday, the system was restarted, with oxygen addition at 40 LPM. The average H2S level was slowly reduced from 28.7 ppm to 1.17 ppm by Friday, September 23rd. The delay effect is very typical when introducing oxygen into the force main. 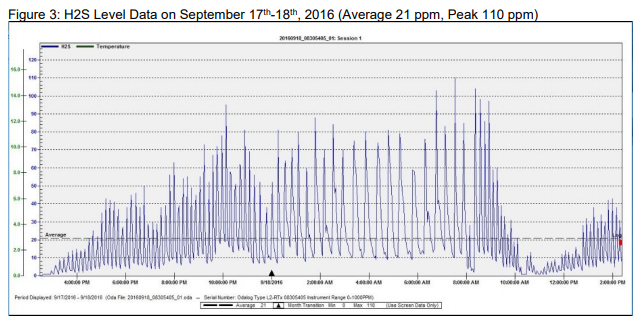 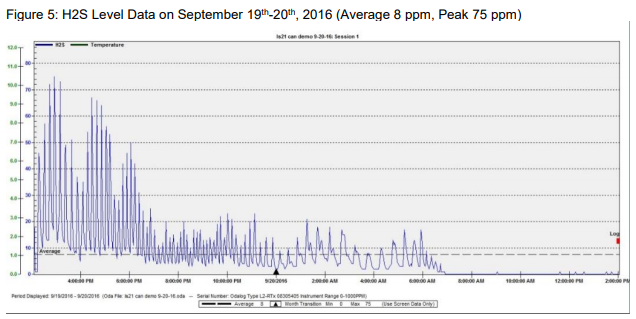 Similar to gas phase H2S level measured in a manhole, the Sulfide has the same effect when there is a high level of oxygen in the water. In general, if the DO level is above 2 mg/L, the Sulfide level will be close to 0 mg/L. As show on the below figure, there is no sulfide if the average DO is higher than 2 mg/L.

The purpose of this wastewater treatment testing is to demonstrate that 55 LPM of oxygen could treat or improve the wastewater odor control at 7070ft downstream of the infusing point. The goal of this demo is to increase the DO level to 2 mg/L at downstream location.

As is clear from the data above, the H2S and sulfide levels in the manhole during the treatment are almost eliminated if there is high level of DO. The initial dose was 70 LPM which was proven to be too much for the flow during the demo. The second dosage set at 40 LPM was almost adequate to treat the system with average water temperature at 16.7C.

A FORSe2 system with an output of up to 55 LPM oxygen would provide effective wastewater treatment and the desired results at the discharge manhole during all phases of the year. In all but the hottest months, the system will most likely operate at a level well below the maximum output. The Anue system that best achieves this is a FFM-0-60-M1. This not only ensures additional treatment capacity for future, unforeseen demands, but also keeps the system from working at full load all the time, limiting both operational and lift station maintenance costs.

To learn more about the treatment of wastewater and how Anue Water Technologies can help you with your lift station maintenance, oxygen treatment and oxygen ozone water control, contact us today!